The History of a 4th Generation Aussie Whip Maker 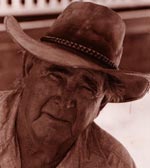 Brian Nemeth is the great grandson of Joseph Nemeth, a Hungarian Soldier, Saddler and Whip Maker.
On March 31, 1855 Joseph Nemeth arrived on the SS Aurora at Moreton Bay, Queensland Australia.
He later married Anne Doyle and they settled at Allora on the Darling Downs, Queensland where he started his Saddlery and Whip Making business.
They raised four children, one of who was my grandfather William and his brother Joseph.
The two brothers took over the business during the 1890's, when their father retired, and kept it going until 1906 when they decided to close and leave Allora.
The family home in Allora is still lived in and in good repair.

When Brian's brother Peter started making whips, in 1968, Brian soon realised that the gift of whip making was in his genes also.
Brian quickly developed new methods, which helped him to produce whips in large quantities to supply the trade.
He knew that he had and still has a great love for whip making.
Brian's brother Peter left during 1969 and through the years Brian has passed on his fine workmanship and skills to his family.
Brian claims to have made more whips than any other person in the world, having made between approximately 80,000 to 100,000 whips.