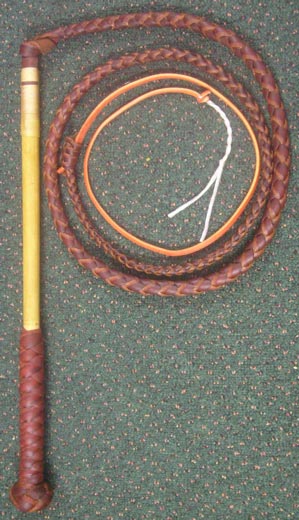 Whips have been used in many parts of the world since the earliest days of our recorded history.
They have mainly been used when working with animals, but other uses have been associated with punishment, sport and show work.
There are many different types of whips that are suited to different applications.
The Australian Stockwhip, American Bullwhip, Australian Bullockwhip, Buggy Whips and the Lunging Whip are just a few examples.
Different countries and even regions developed different styles of whips and methods of making them.

The Australian Stockwhip is a unique type of whip which was developed in Australia since white settlement in 1788.
The purpose of the Stockwhip is to assist people who work with cattle either on horseback or in cattle yards on properties and stations (ranches).
The whip is mainly used to produce a noise that frightens the cattle and moves them in the desired direction.
Less frequently, they are used to hit the cattle.

In Australia, the people who work on properties are called Stockmen, so is would be natural to assume that the name "Stockwhip" came about as a result of these people using these whips when working with stock, but this is actually incorrect.
The name Stockwhip is derived from the fact that the handle of the whip is called the Stock.
The rest of it, attached to the Stock, is the Whip.