To successfully master the art of whip cracking, a person must first understand exactly what makes a whip crack.

Figure 1.1 depicts the shape of the Stockwhip
A Stockwhip is made up of the Handle (or Stock), the Thong (the plaited part), the Fall (a single strip of leather) and the Cracker.
The Handle is attached to the Whip by a section called the Keeper.
This connection is shown in Figure 1.2 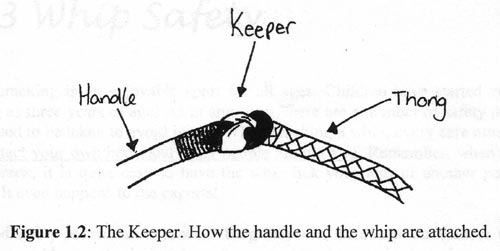 As you can see in Figure 1.1, the Whip is shaped in a tapering fashion.
The amount of taper, the thickness and length of the Thong varies from Whip to Whip and from Whip Maker to Whip Maker.
A single piece of leather is the attached to the end of the Thong.
This is known as the Fall.
The Fall is is a replaceable part of the Whip and is the section that will take the most wear and tear.
Attached to the Fall is the Cracker.
This is the part of the Whip that finallt breaks the sound barrier and produces the cracking noise.
Crackers require frequent replacement.
The shape, length, thickness and material used for the Cracker produce different cracking tones when breaking the sound barrier.

The Whip breaks the sound barrier because as it is swung, we exert a force from handle and energy is transferred along the length of the whip.
Because the whip is tapered from thick to thin, the Kinetic Energy flowing along the Whip causes the loop created to travel faster and faster until, when it reaches the Cracker, the loop is traveling in excess of 343 meter/second and creates a small sonic boom - the cracking sound that we hear.
It is believed that the first time Humans broke the sound barrier was by cracking a Whip.

The force required from the person holding the Whip is very minimal to make it crack.
It only requires a change of direction of the Whip or a change in speed.
The techniques used to do this are shown on other parts of this website.