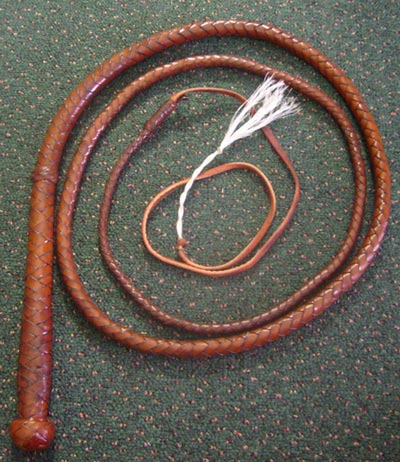 A bullwhip is a single-tailed whip, usually made of braided leather, which was originally used as a farmer's tool for working with livestock.

Bullwhips are agricultural tools, traditionally used to control livestock in open country.
A bullwhip's length, flexibility, and tapered design allows it to be thrown in such a way that, towards the end of the throw, part of the whip exceeds the speed of sound - thereby creating a small sonic boom.
Many modern "sport" whip crackers claim that the bullwhip was rarely, if ever, used to strike cattle, but this is a matter for debate.

The origins of the bullwhip are also a matter for debate and, given the perishable nature of leather, are likely to remain so.
Difficulties in tracing its development also arise from regional and national variations in nomenclature.
There are claims that it was developed in South America where these were also used, as well as 'Cow-Whips' during the Slave Trade as weapons, generally in North Carolina, or arrived there from Spain, but Roman mosaics and earthenware dating to around the second and third century A.D. show what appear to be tapered drop-lash whips, rather than the two-piece whips often associated with the Romans and other ancient cultures.
Given that the same basic design appears in several primary sources, it seems likely that this is not a stylistic coincidence but a depiction of a design of whip in current use at the time the articles were made.

During the late 19th and early 20th Centuries, as rural economies became increasingly mechanised, demand for all types of whips diminished.
By the middle of the 20th Century, bullwhip making was a dying craft, with only a few craftsmen left making good quality whips.

In the latter half of the 20th Century, attempts to preserve traditional crafts, along with a resurgence of interest in Western performance arts and the release of films such as Raiders of the Lost Ark (in which the hero, Indiana Jones, uses a bullwhip as both a tool and a weapon), led to an increased interest in whip cracking as a hobby and performance art, as well as a competitive sport. 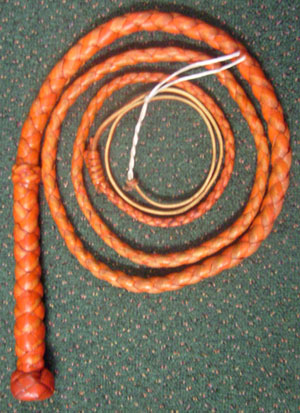 Whip cracking competitions focus on the completion of complex multiple cracking routines and precise target work; although it should be noted that other whips, apart from bullwhips, are also used in such competitions.

The bullwhip is still used for herding cattle in countries such as the United States, South America, Australia.
But in countries such as the UK, where other types of whips were historically used in agriculture and transport, modern public perception of the bullwhip most commonly whips that are easy to use for long periods of time, has enabled a new generation of whip makers to become established, producing whips that move away from the traditional heavy bullwhip towards lighter, whips that can be used for long periods with great accuracy and without causing undue fatigue.
Such whips have become popular in the sport whip cracking world, enabling participants to push the limits of complexity in their routines and enabling increasing numbers of women and younger people to take up whip cracking as a hobby.