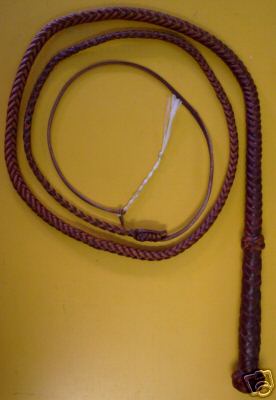 A bullwhip consists of a handle section, a thong, a fall, and a cracker.
A wrist loop may also be present, although its chief purpose is for hanging one's whip on a hook.
Aesthetically, it finishes the handle.

The main portion of the bullwhip's length is made up of a braided body or thong.
Made of many strips of leather, the number of braids or plaits is an important factor in the construction of the whip.
Often the thong is multi-layered, having one or more "bellies" in the center.
Some whips have at two or more bellies, made of braided leather like the surface of the whip, though with less plaits. Other whips may have bellies made from strips of leather rolled to form a tapered foundation for the whip.
Unlike in the Australian stock whip, the thong is plaited as a continuation of the handle plait rather than being connected with a joint.

The handle is usually short, being between 8 and 12 inches long.
While some whips have an exposed wooden grip, others have an intricately braided leather covered handle.
Leather-covered handles usually contain a butt foundation, which is held in the palm of the hand when cracking, and can have a wrist loop, used for hanging the whip at the end of the day, not for putting around the wrist during use.
Some handles swivel, making it easier to do certain types of unsophisticated cracks but making it harder to do others, or to use the whip for any type of accurate targeting.
The Australians introduced a longer handled bullwhip to the US, where the bullwhips traditionally had shorter handles.
The longer handled whip (handle of 10-14 inches) functions like a cross between a stockwhip and a bullwhip, and is referred to as a "Target Whip."

Bullwhips are usually measured from the butt of the handle to the end of the plaiting of the thong.
The thong typically terminates at a fall hitch - a series of half hitches that neatly tie the replaceable fall (or tail) to the whip.
Whips range in length from 3ft to very long bullwhips of 20ft with some examples being even longer.

A fall is a single piece of leather between 10 and 30 inches in length.
It was traditionally made to be replaceable and to take the wear and tear of dragging on the ground when on horse back as it is much easier to replace a solid piece of leather than to re-plait the whip.
In lesser quality whips the fall can also be a continuation of one of the strands used in plating the overlay or the fall can be an extension of the core of the whip, with the strands from the overlay tied off, and the core continuing on as the fall.
But these types of falls do not allow for replacement and thus are not practical. 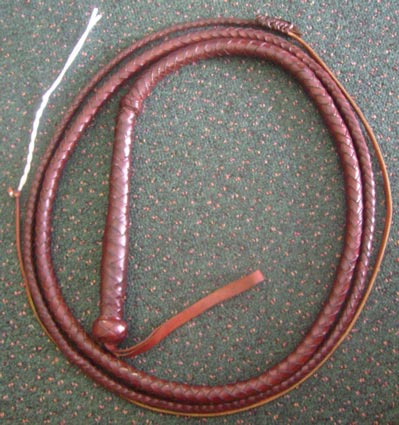 Tied to the end of the flexible fall, is an even more flexible piece of string or nylon cord or wire called the cracker.
The cracker is the portion of the whip that makes the loud noise which is a small sonic boom.
A whip without a cracker will still make a sonic boom, but it will be less audible unless you are standing directly in front of it.
The cracker functions to disperse the sound so it can be heard more easily.
Cracking a whip causes wear to the cracker, and well used whips frequently require new crackers.
Crackers can be made of horsehair, twine, string, thread, silk, polyester or any number of materials.
There are several methods of tying the cracker to the fall, usually using a larkshead knot as the basis since it tightens on itself when the whip is cracked, reducing the chance the cracker will slip off the fall and be sent flying into the air.

Bullwhips come in many different weights, materials, and designs.
Some light whips use shot loading or lead weighting to affect their balance.
Though usually made of strips of leather, nylon whips (often using paracord) have become popular -- they were initially developed for use in the wetlands of Florida specifically, where leather is difficult to maintain hence the name "Florida Cow Whip" but have recently gained in popularity because they are less expensive than leather.
In the old days in America, regular cowhide, rawhide and oxhide leathers were most commonly used for the construction of bullwhips because they were readily available.
They tend to be quite thick and sturdy and are good for harsh conditions.
Some whip-crackers doing target work prefer a whip made of kangaroo skin and Kangaroo hide is preferred by whip makers because it is many times stronger than cow hide and can be cut into fine, strong laces allowing for more intricate braiding patterns that in the past only could only be done with rawhide, which is much harder to work with.